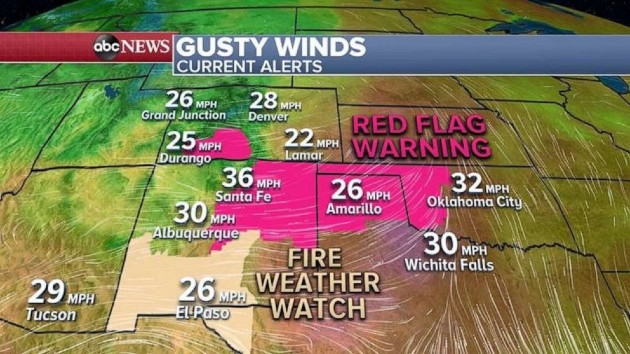 (NEW YORK) — The Charleston Fire in Douglas County, Colorado, forced hundreds of families to flee their homes Monday as the fire quickly grew to 500 acres.

Nearly four dozen wildfires are currently burning in the West all the way from California to Nebraska.

Gusty winds and extremely dry conditions in the last few days have helped the spread of these wildfires from Nevada to Utah and into Colorado.

On Tuesday, the windy conditions will move further east threatening areas from Colorado to New Mexico, Texas and Oklahoma where Red Flag Warnings have been issued.

Meanwhile in the East, flash flooding and severe storms are expected from the Midwest into the Northeast.

There were also flood rescues Monday in Kentucky where some areas got more than 4 inches of rain in just a few hours, flooding roads and neighborhoods.

In the Northeast, damaging winds of up to 70 mph hit the borough of Queens in New York City, bringing down trees, and golf ball-sized hail was reported in the Hudson Valley.

On Tuesday, severe storms are expected in the Plains from the Dakotas into Nebraska where damaging winds will be the biggest threat.

Besides the storms, flooding rainfall is possible in the mid-Mississippi River Valley around St. Louis down to Tennessee where locally some areas could see up to a half a foot of rain and flash flooding Tuesday.

Elsewhere, a holiday week heat wave is developing for most of the Eastern U.S.

On Tuesday, a Heat Advisory has been issued from Texas to Missouri for five states where temperatures could reach as high as 105 degrees with the heat index in some areas approaching 109.

This scorcher then should move east into the Midwest, the Great Lakes and the East Coast.

Temperatures and humidity will make it feel like its 90 to 100 degrees from Minneapolis to Chicago, Detroit and even New York City by the Fourth of July.