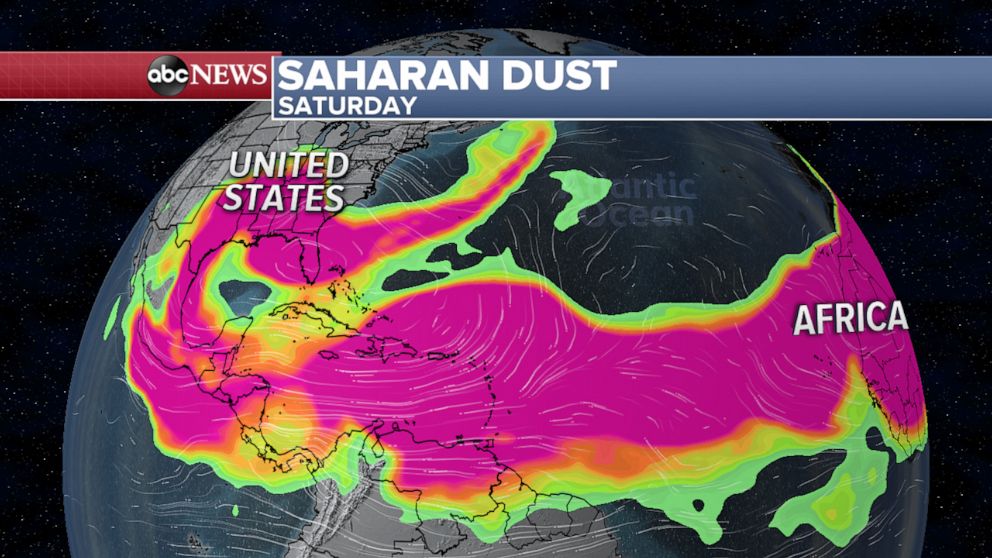 (NEW YORK) — The skies over the East Coast and South are going to be a bit dusty this weekend.

A massive dust plume from the Sahara desert is already making its way through the southern part of the U.S. and will envelop cities between Texas and New York by Sunday.

While the scope of the plume may seem large, it won’t produce a haboob — or low-level dust cloud — as the air layer will be between 5,000 and 20,000 feet in the atmosphere.

Nevertheless, health experts say it still poses risks to people with respiratory problems. It can also cause sinus problems and itchy eyes, nose and throat for people who are sensitive to those symptoms.

At the same time, the Saharan Air Layer will have a colorful effect on the horizon. The dust will affect the sunset and give the sky different shades of red during the end of the day.

The Saharan Air Layer is transported westward by bursts of strong winds and tropical waves located in the central and western Atlantic Ocean. It typically peaks between June and August.

The dust typically hits the Western Hemisphere every 3 to 5 days but it is usually in smaller encompassments. It also suppresses hurricane activity and development in the Atlantic Ocean.

The dust plume covered the skies around the Caribbean earlier this week.